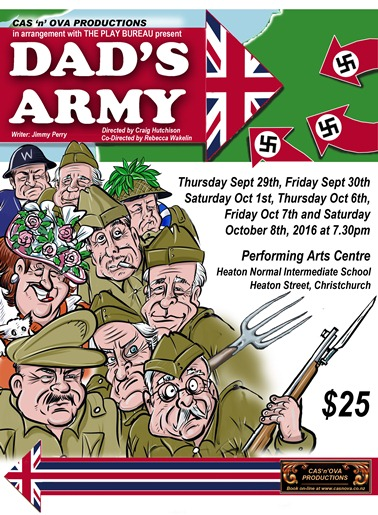 Alternating moments of gentle character comedy with broad slapstick, it recounts the misadventures of the local voluntary defence force (or 'Home Guard') consisting of men too old or 'unfit' for military service.

They are led by the pompous Mainwaring, manager of the local bank, and consist of the suave, mild-mannered Sergeant Wilson , Lance-Corporal Jones, the town's butcher and an old soldier prone to hysteria, cockney spiv Walker, dour Scots undertaker Frazer, gentle, elderly and incontinent Godfrey and dim-witted mummy's boy, Pike, whose mother is 'friendly' with Wilson.

They are based in the Church hall where there is much friction between Mainwaring, the effeminate Vicar, his creeping Verger and ARP Warden Hodges (the grocer) who calls Mainwaring 'Napoleon' and strongly dislikes him.

The 80 episodes (the last 68 made in colour) have been frequently repeated, many are available on video and there was a 1971 Cinema version. A British institution, familiar to most people throughout the country.