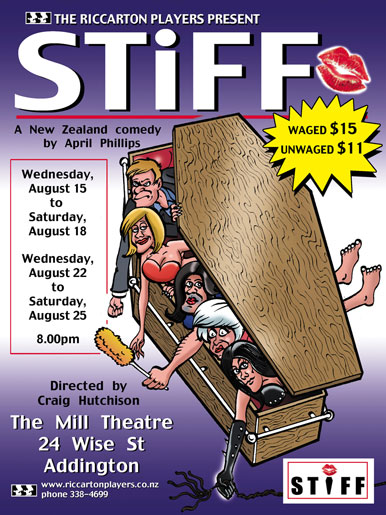 Angel Delight, the illegitimate daughter of a funeral parlour director, inherits the business when her father dies.

Before she can sell the business and the land (which is much more valuable) she has to continue to run the business as a funeral parlour for a further five years. Unfortunately she knows nothing about the funeral business but a lot about prostitution.

Angel and her team of 'girls’ (including an obsessive compulsive transvestite named Delilah) run an undercover massage parlour in the funeral home keeping up appearances despite the prying of disgruntled former employee Mr R. Swipe who felt he should have inherited the business.

Suspenders, death by misadventure and unorthodox embalming techniques feature in this hilarious, quickfire comedy.  Rude not crude, cheeky not vulgar – it’s a modern farce with lots of great characters.